We study the thermodynamic and high-magnetic-field properties of the magnetic insulator Ba5CuIr3O12, which shows no magnetic order down to 2 K, consistent with a spin-liquid ground state. While the temperature dependence of the magnetic susceptibility and the specific heat shows only weak antiferromagnetic correlations, we find that the magnetization does not saturate up to a field of 59 T, leading to an apparent contradiction. We demonstrate that the paradox can be resolved, and all of the experimental data can be consistently described within the framework of random singlet states. We demonstrate a generic procedure to derive the exchange coupling distribution P(J) from the magnetization measurements and use it to show that the experimental data are consistent with the power-law form P(J) ∼ J−α with α ≈ 0.6. Thus, we reveal that high-magnetic-field measurements can be essential to discern quantum spin-liquid candidates from disorder dominated states that do not exhibit long-range order. 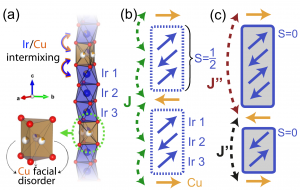 We study Fe1+yTe0.6Se0.4 multi-band superconductor with Tc = 14K by polarization-resolved Raman spectroscopy. Deep in the superconducting state, we detect pair-breaking excitation at 45cm−1(2∆ = 5.6meV) in the XY(B2g) scattering geometry, consistent with twice of the super- conducting gap energy (3meV) revealed by ARPES on the hole-like Fermi pocket with dxz/dyz character. We analyze the superconductivity induced phonon self-energy effects for the B1g(Fe) phonon and estimate the electron-phonon coupling constant λΓ ≈ 0.026, which is insufficient to explain superconductivity with Tc = 14 K. 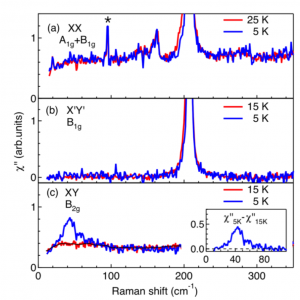 Sean's excellent dissertation, "Collective excitations in the antisymmetric channel of Raman spectroscopy", is an outstanding contribution to the physics society. 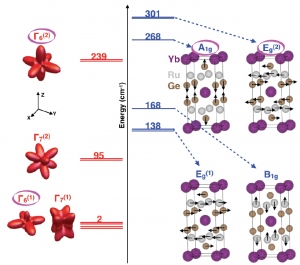 We are exceptionally proud to announce that Mai Ye has won the Peter Lindenfeld Graduate Fellowship. The fellowship, established to honor Professor Emeritus Lindenfeld, supports a Physics and Astronomy graduate student who exemplifies the teacher-scholar model of learning pioneered by Prof. Lindenfeld. We want to celebrate Mai for his excellence in both scholarship and mentorship!

We are proud to announce that Alex's poster, "Resonant Raman Scattering in the Giant Rashba System BiTeI", won the Leszek Wielunski Award for Best Poster Presentation at the 33rd Annual Symposium of the Laboratory for Surface Modification (LSM). Congrats to Alex for winning this prestigious award!

We are proud to announce that Sean Kung's dissertation, "Collective excitations in the antisymmetric channel of Raman spectroscopy", is the recipient of the 2019 Northeast Association of Graduate Schools Outstanding Doctoral Dissertation Award. His story is highlighted in the Rutgers Physics News. Congrats to Sean for winning this prestigious award!

We observe composite particles -- chiral excitons -- residing on the surface of a topological insulator (TI), Bi2Se3. Unlike other known excitons composed of massive quasiparticles, chiral excitons are the bound states of surface massless electrons and surface massive holes, both subject to strong spin–orbit coupling which locks their spins and momenta into chiral textures. Due to this unusual feature, chiral excitons emit circularly polarized secondary light (photoluminescence) that conserves the polarization of incident light. This means that the out-of-plane angular momentum of a chiral exciton is preserved against scattering events during thermalization, thus enabling optical orientation of carriers even at room temperature. The discovery of chiral excitons adds to the potential of TIs as a platform for photonics and optoelectronics devices.

Long-range order of multipoles, namely high-rank electric or magnetic moments, has been attracting great interest. For example, second-rank quadrupolar moments could lead to novel phenomena including quadrupolar Kondo effect and quadrupole-fluctuation-mediated superconductivity. f-electron systems are suitable choices to study multipolar interactions and ordering phenomena by virtue of the interplay of the spin and orbital degrees of freedom. CeB6, with its simple chemical composition, lattice structure, and electronic configuration, is considered a prototypical example of heavy-fermion metals with quadrupolar ordering. Additionally, CeB6 serves as stable electron-emitting cathodes due to its low work function. This material has found broad applications in surface analysis, metrology, X-ray sources and free electron lasers. Therefore, a study of CeB6 , which illustrates the rich physics of this compound in a detailed and transparent way, contributes to both academia and industry.

In this work, we report a comprehensive spectroscopic study of CeB6 to explore its electronic, phononic and magnetic excitations. We identify an intense photo-luminescence feature resulting from the resonant optical transition between Ce 4f and 5d bands. We preform a detailed temperature-dependent study of both intra- and inter-multiplet crystal-field (CF) excitations, and illustrate the interaction between light and CF states by a model Hamiltonian calculation. By studying lattice dynamics, we show the electron-phonon interaction dominates phonon-lineshape broadening, and moreover induces a summation mode of CF transition and lattice vibration. We observe quasi-elastic magnetic fluctuations developing below 20K. The temperature dependence of the corresponding Raman susceptibility is consistent with the magnetic susceptibility data. By comparing our data with those measured by other techniques, we identify this magnetic feature as a manifestation of ferromagnetic correlations induced by tendency towards quadrupolar ordering.

This systematic study of CeB6 will serve as basis for future study of this model system. Especially, we demonstrate two virtues of Raman scattering which have not been generally appreciated: 1, temperature dependence of the parameters of CF excitations reveals the interaction between f-electrons and itinerant electrons; 2, low-energy Raman response probes dynamical fluctuations related to exotic multipolar ordering. More importantly, this work demonstrates the spectroscopic approaches and theoretical analyses of studying rare-earth systems with localized f-electrons, especially systems with a single f-electron or hole localized on an rare-earth ion at high-symmetry crystallographic site, by secondary-emission spectroscopy. The same method has direct applicability to f-electron systems consisting of Ce or Yb ions, and can be further applied to a range of rare-earth materials.

We are exceptionally proud to announce that our Dr. Hesiang-Hsi (Sean) Kung has been selected to become the Rutgers nominee for the Northeastern Association of Graduate Schools 2019 Doctoral Dissertation Award! His story is highlighted in the School of Graduate Studies (SGS) Grad News.